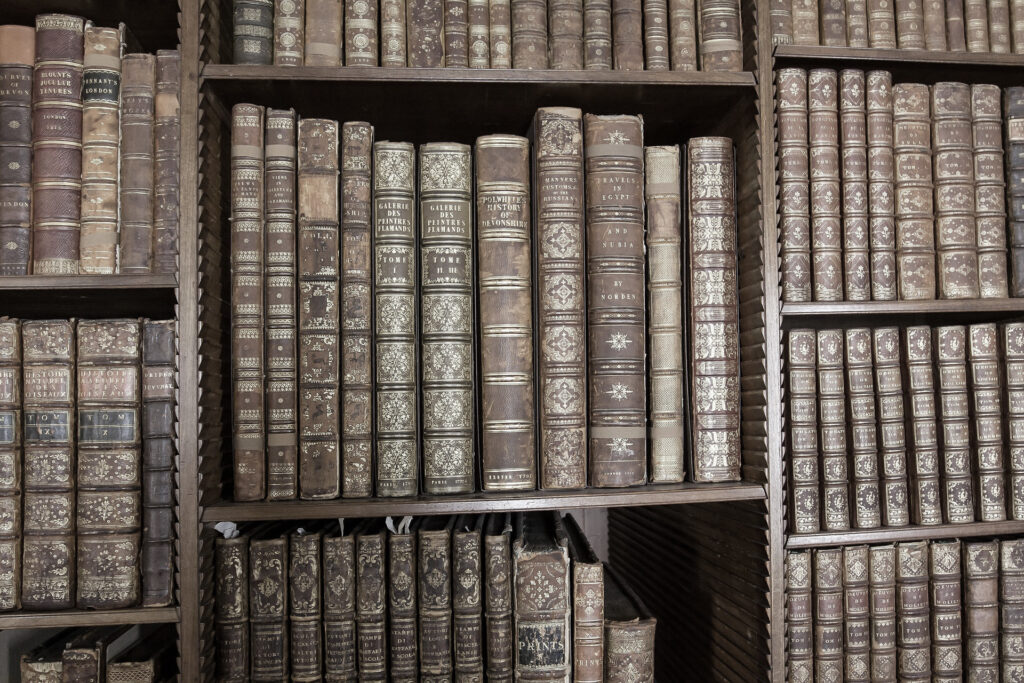 They say ‘never make your own book cover art’ and they (whoever ‘they’ are) are almost certainly correct. Nevertheless, I did make mine, and it was for the following reasons:

Are my book covers the best they could possibly be? No, obviously. But are they as good as some professionally designed covers? I think so. Do they scream ‘home-made’? I hope not.

So this post is about how I made some of my book covers. This is the post I would love to have read when I first started making covers, or when I decided they needed to be improved. I’ve watched some great YouTube videos on how to make book covers and there are thousands of ‘how to do Photoshop’ videos, but I was looking for something simpler. These covers aren’t complicated or fancy and I’m sure there are better ways of making them, but this is what I did …

Song of a Red Morning 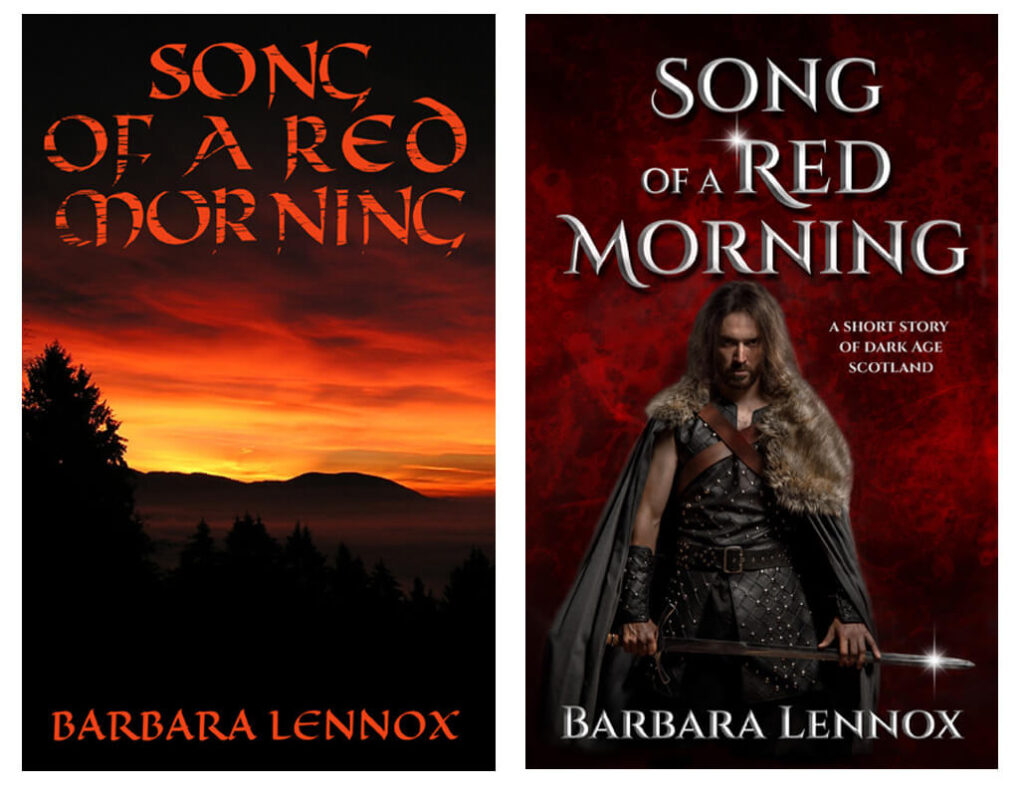 This is the first cover (left) I took seriously. The original was just thrown together using an image from Pixabay, a font I found on a free font site, and a text effect I learned to make from a YouTube video. But, design-wise, it doesn’t say ‘dark-age historical fiction’. So I had another go (right) using the following assets:

An image of a ‘warrior’, an image of some smoke (both bought images from Shutterstock), an image of rust as an image overlay (from Pixabay) and Cinzel decorative font which I kind of regret since EVERYONE uses it. I also made a ‘starburst’ brush for the light flares on the sword and the R of the text – wish I could remember how I did it or where it is! The sequence for making the cover in Photoshop was as follows: Black background, smoke background (in two layers), rust overlay (colour burn) at 40% opacity, warrior with background removed and darkened. The text has the following effects: bevel, inner glow and drop shadow. Finally I added the starburst on the sword and R of the text. (I have recently unpublished this ‘book’ on Amazon – it’s now available as a download to subscribers to my Newsletter)

The Man who Loved Landscape and other stories 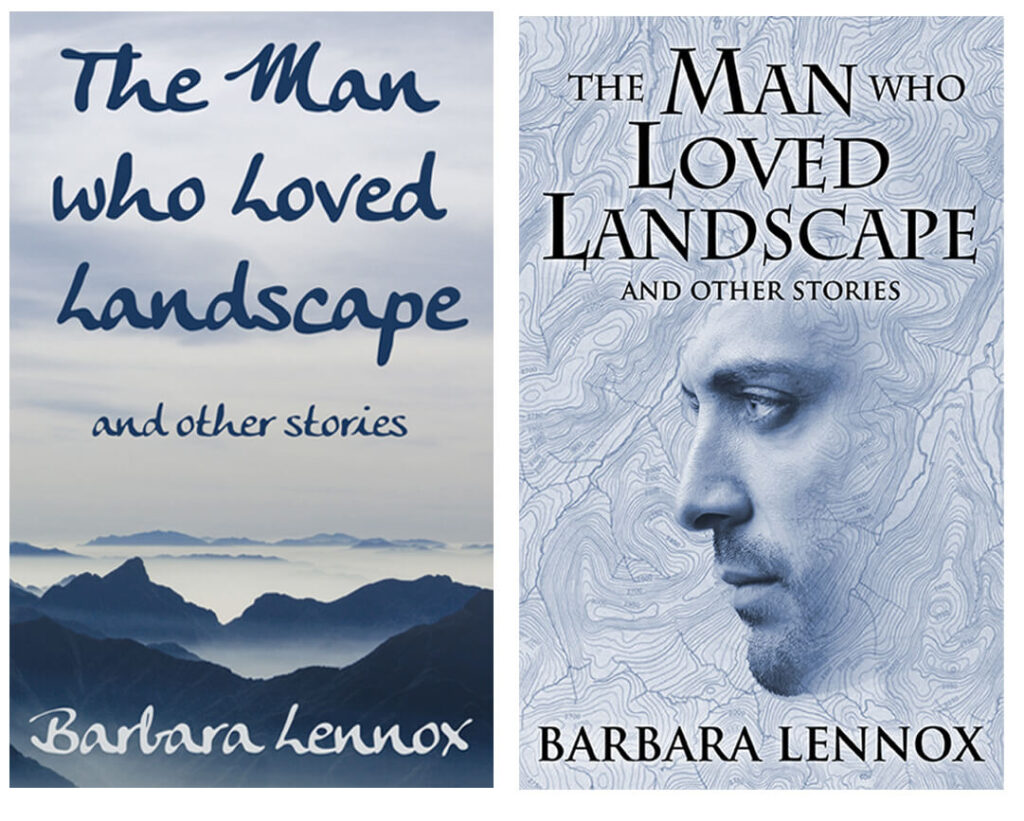 Again, I didn’t take the first cover (left) too seriously; I used an image from Unsplash and a font that was on my computer. As soon as I published the book I hated the font so that was the first thing I had to change. I also wanted something more dramatic with a link to the title, so thought about a man dissolving into landscape. After a lot of messing around with various images of mountains, I settled on using a map as the background, which was simpler and more directly connected to the title story. I used the following assets:

An image of a man in profile from Shutterstock, and an old map from the National Library of Scotland (free). I didn’t want the complication of place-names on the map so used a map that just had contour lines and rivers. To pull the whole thing together I colourised it in grey-blue. The font is Charlemagne Std, with a simple outer glow to set it apart from the background. The sequence of making the cover was: White background, map, contrast increased, man added and blended into the background, colourisation of all layers, text added. Pretty simple really.

The Ghost in the Machine 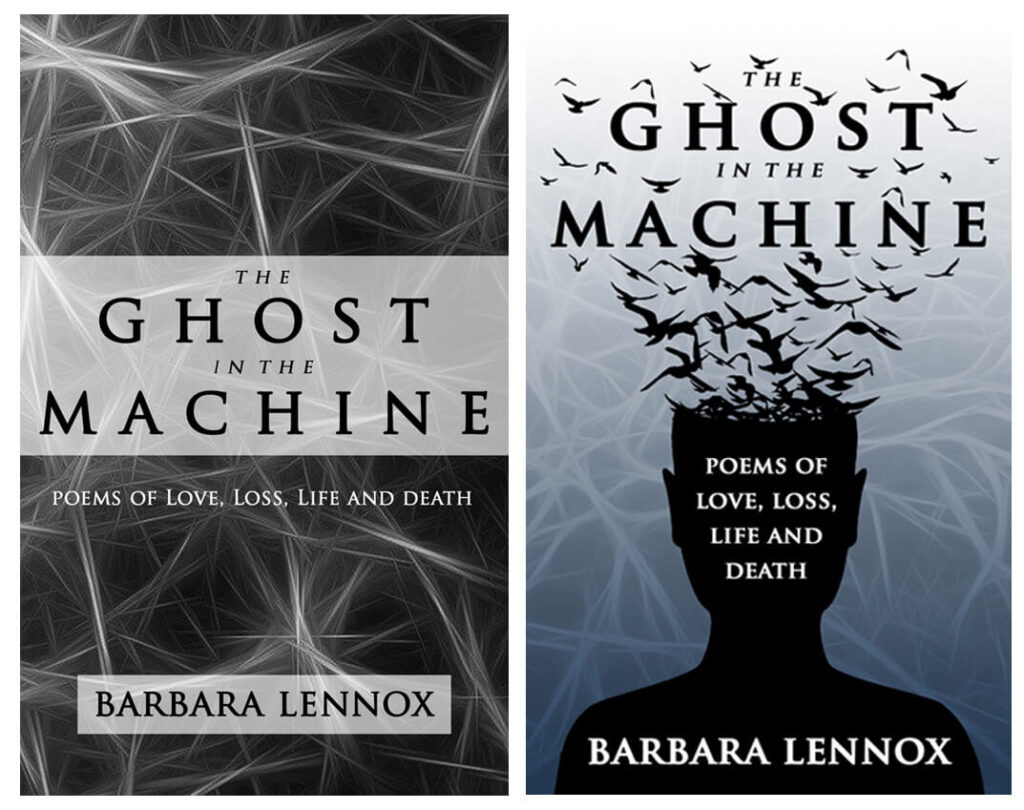 This was another cover I changed not long after I made it. After looking at some poetry books on Amazon I noticed that most of them were illustrations rather than images, so I looked for an illustration that fitted the genre. The birds flying out of a head seemed to fit the idea of poetry, and I set it against a background of fractals that looked like nerves (which I’d used in the first version). So the assets I used were: 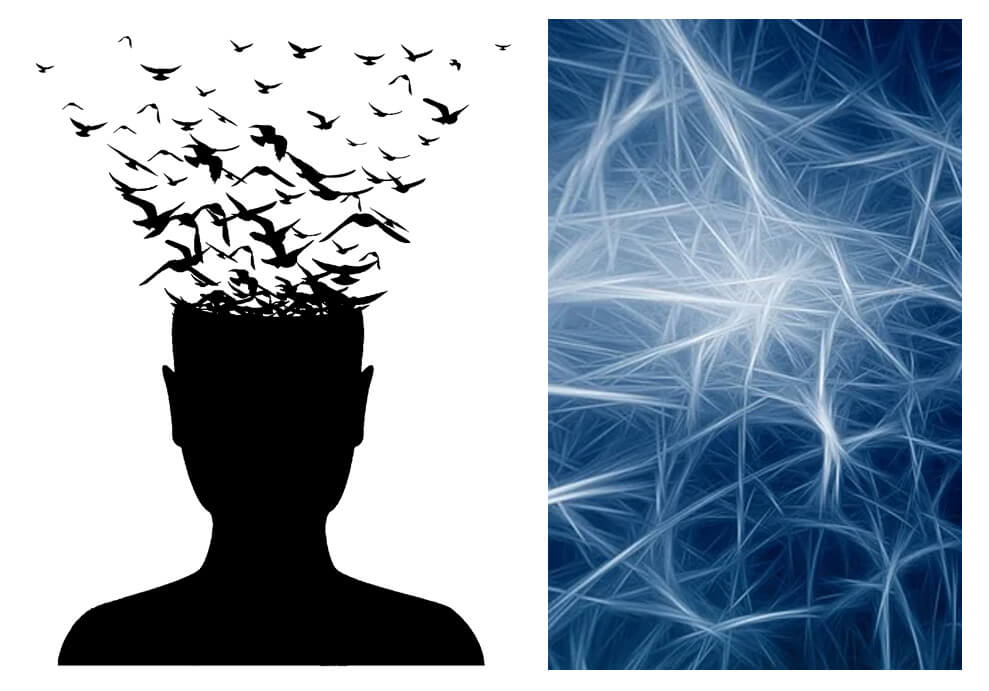 Image of head from Shutterstock, an image of ‘nerves’ on Pixabay. The font is Trajan pro. (Now I have an updated version of Photoshop I could make a better job of spacing the letters out. Kerning wasn’t possible with the version I had at the time.) The sequence of making the cover was: a white background layer overlaid with a gradient from blue to white. The colour was adjusted separately to get the right shade, ‘nerves’ added at 13% opacity, head added in two layers to duplicate birds. A few more birds added. Text added and any birds touching the text were removed.

The Wolf in Winter 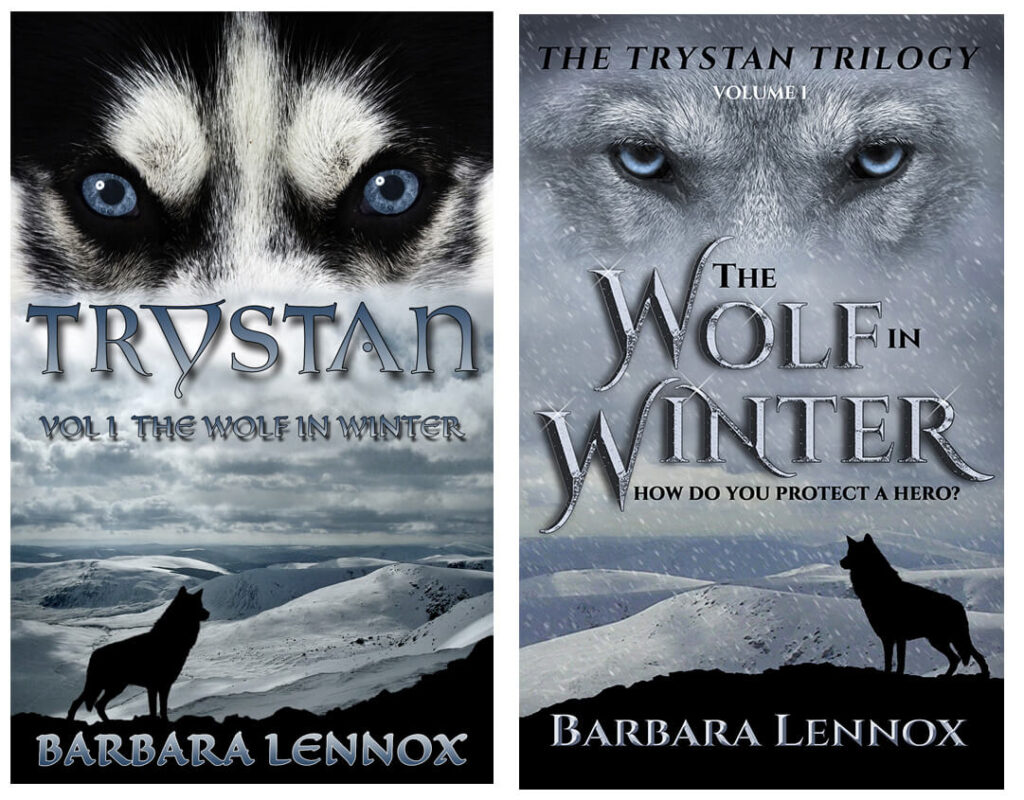 All these covers were really just practice for the ‘real thing’, my cover for The Wolf in Winter. This went through a long series of versions (one of which is shown on the left), during which I learned a lot about Photoshop! The final cover uses the following assets:

The  background image is my own photo (view from Mayer towards Glen Prosen in the snow) together with a photo I took of some clouds to extend the sky, and another of my images (not sure which one) I used for the rocky ground silhouette at the bottom.

Wolf head and Wolf body from Shutterstock, another wolf body from Pixabay. The text is a mix of Cinzel decorative and Cinzel, with an effect to make it look like steel. The wolf bodies were turned into silhouettes and combined into one wolf, using the head of one and the back-end of another. I added the snow effect after learning how to do this on Youtube – can’t remember how I did it now. The sequence of making the cover was: background layer of mountain image, blended into clouds image, and background lightened. The wolf head was added, desaturated and colourised blue, with the eyes being enhanced and brightened. The snow effect was added then removed from the wolf. The ground silhouette was added in three sections (this was the least satisfactory part of the cover), then the wolf parts, which were duplicated and flipped for the back page of the paperback. The text was added and the metallic effect applied, using bevel, stroke, a bluish colour overlay and a drop shadow. Some sparkles were added to the text using a white crosshatch brush. Finally, a blueish vignette was added to the outer edges.

The Swan in Summer 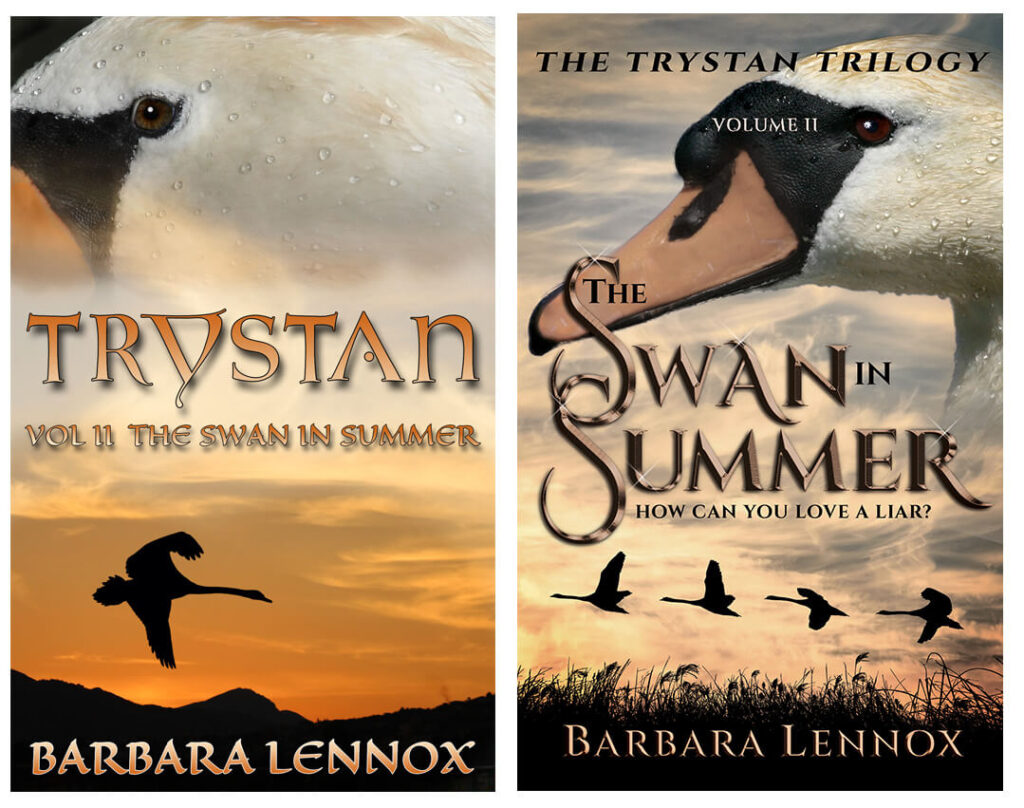 This cover was easier (and cheaper). Since it had to match The Wolf in Winter I had fewer decisions to make. The hardest thing was finding the right swan. I would have preferred a swan looking straight ahead but although I found one it didn’t look too impressive. Swans have very small eyes! 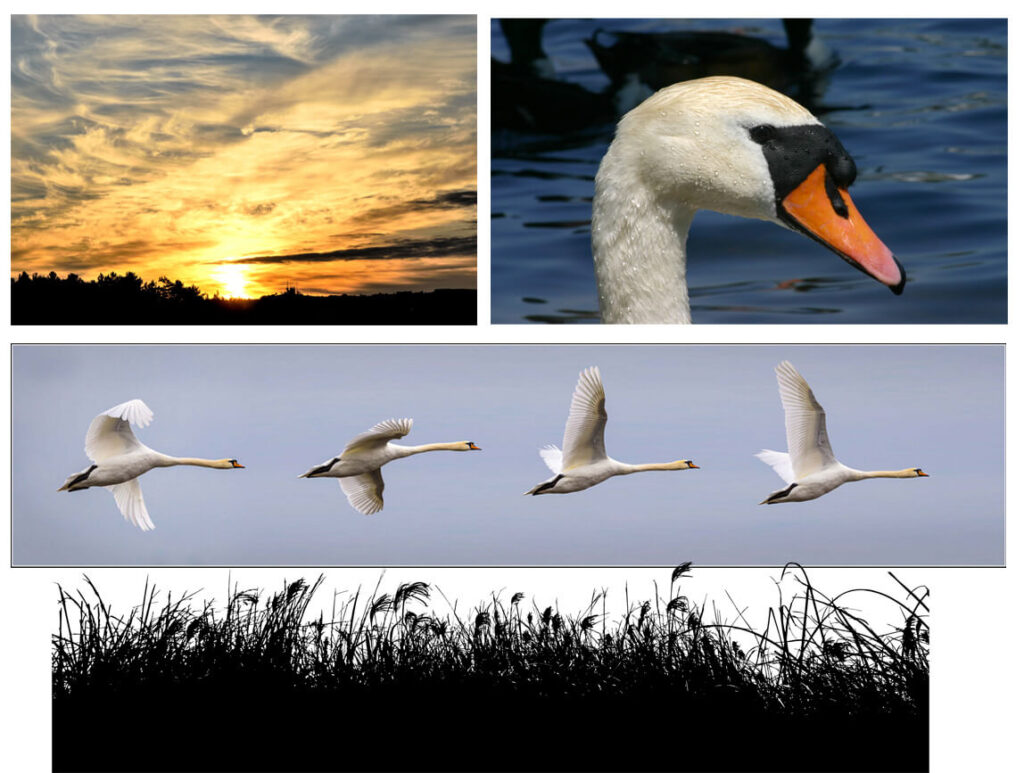 The assets I used were an image of a swans head, and some flying swans, both from Flickr. The background image was the sky section of a sunset, from Pixabay, the grass/reeds was also from Pixabay. The swan’s eye came from an image on Pixabay (not shown). The text was the same as The Wolf in Winter. The sequence of making the cover was: background layer is the sunset image, lightened and desaturated. Vignette added, two copies of grass added, Swan silhouettes added, two copies, one flipped (for the back page of the paperback). Swan head added and merged into sky. Beak desaturated. Eye swapped for human eye. Text added, as for Wolf (but with different colour overlay to give bronze effect). Sparkles to text added as for Wolf.

The Serpent in Spring 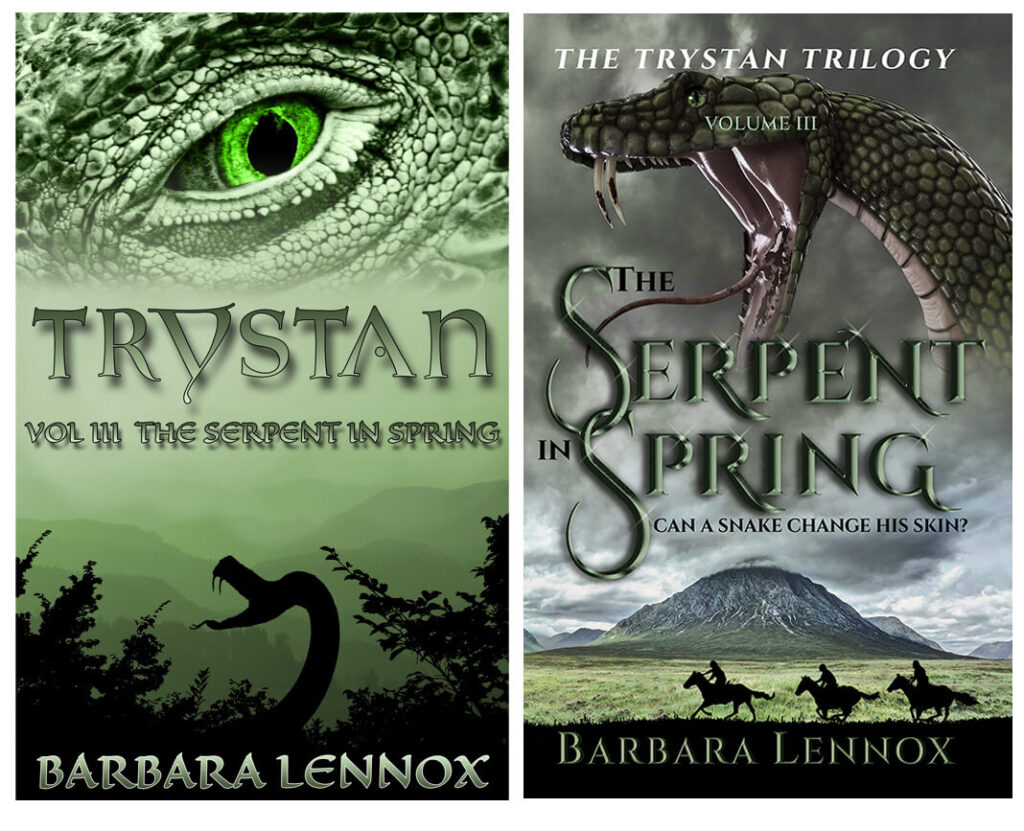 I’m still working on this but I’m using the following assets:

An image of mountains and an image of grassland in silhouette (both from Pixabay), a vector image of horsemen in silhouette, an illustration of a snake’s head and a replacement eye (all from Shutterstock)  The text is as the previous books, with a green colour overlay and the usual sparkles. The sequence of making the cover was: Background image of mountains, duplicated to add more clouds, then colourised green and lightened, and the more distant mountains desaturated. I added three of the four horsemen on top of the grassy silhouette. The snake was added, desaturated and blended into the background. The original eye was replaced with a ‘devil’ eye, recoloured green. The text was the same as the previous two books, with a green colour overlay. Originally I’d wanted to use a snake in silhouette to match the previous books which had silhouettes of a wolf, and swans, but couldn’t see how to do that. My attempt to add a pennant with a snake on it didn’t work, and nor did adding cloaks to the riders. But I’ll keep experimenting. One thing I was pleased about was that the mountain, unnamed in the Pixabay file, turned out to be Buachaille Etive Mor, not only one of my favourite mountains in Scotland, but one which features in the book.

So, should you make your own covers? You should certainly give it a go if you have the software, and the patience to trawl through images on Pixabay, Shutterstock and other sites. At the very least, it will give you an idea of what is possible and what you like, should you decide, in the end, to commission a cover art design.

Free image sites: Pixabay, Unsplash, Pexels, Pond5, (some images are free) Flickr (for Flickr you need to check the permissions for photos you want to use – most are restricted) 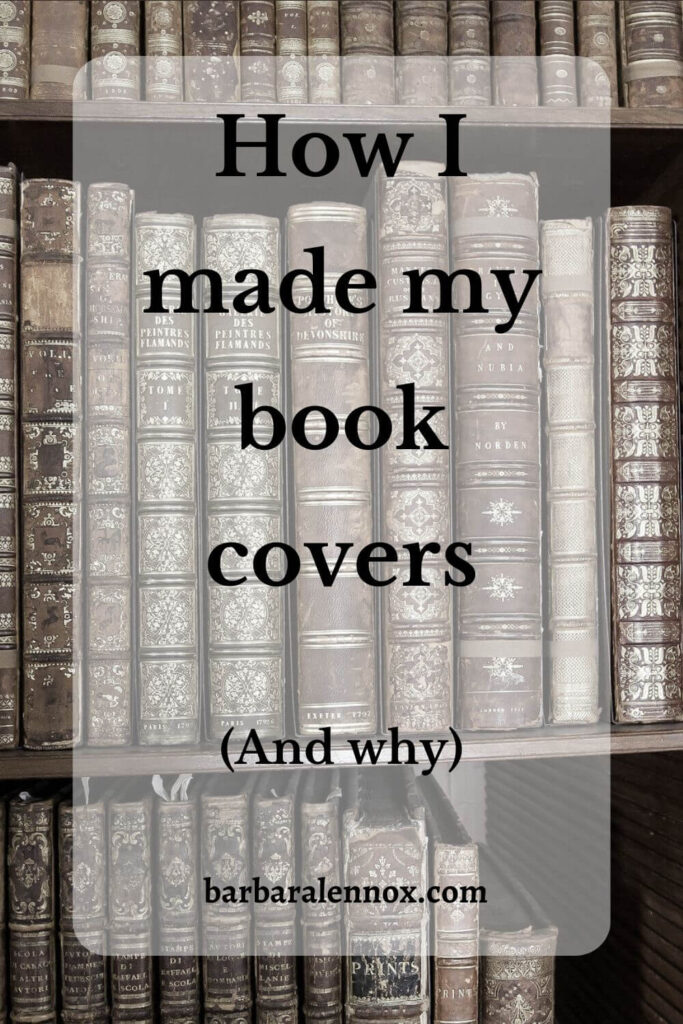