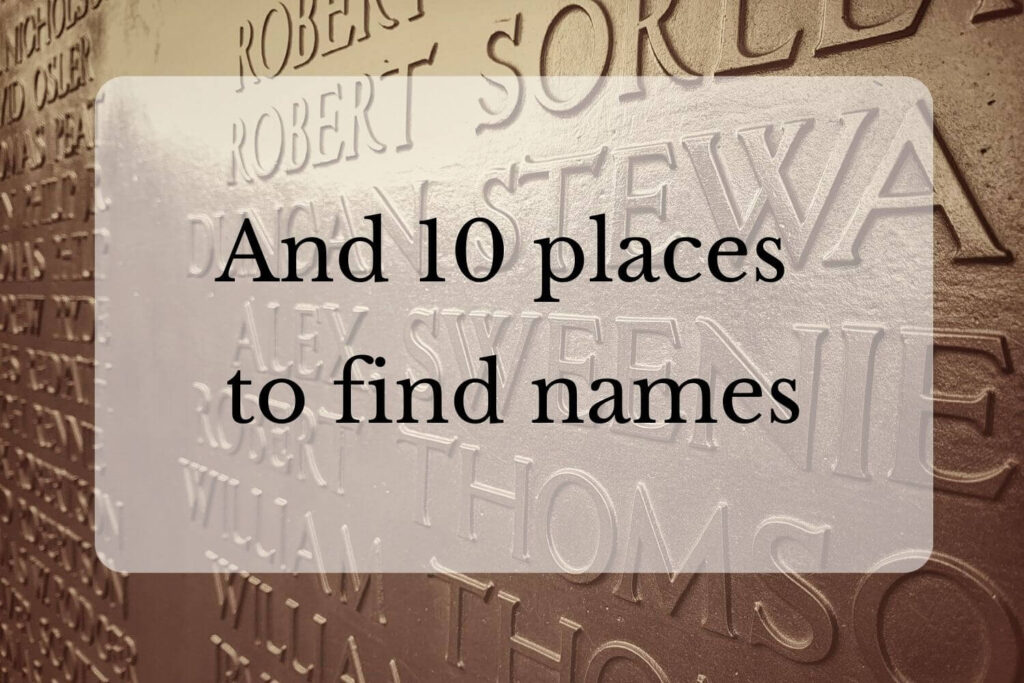 Naming characters is one of the most fun things to do when writing a novel, but there are a few pitfalls and I’ve fallen into most of them. So I thought I’d share a few tips I’ve picked along during my writing journey.

If you don’t, you might accidentally use the same name twice, as I did, or use a similar name, which could be confusing (see tip 2). A list is also useful to generate a dramatis personae: common in historical and fantasy novels. But what about short stories, where there are only a few characters? A list is a good idea here too. When I collected my short stories together for publication, I discovered I had 5 Julias and 2 Julians as main characters. If only I’d kept a list …

This can be confusing to a reader. In The Wolf in Winter I have two main characters who originally were called Aelfrith and Aelith, but I changed Aelfrith to Aelfric (see tip 7) and Ailith to Ealhith. They sound the same but look different on the page. Much easier to read. I still have two many minor characters starting with G – Gwern, Gaheris, Gawain, Garwth, Gereint. Maybe I need to fix this.

Comhghall (Irish Gaelic) – I’d pronounce that Comgal, but it’s actually Cowal. Elasaid (Scottish Gaelic) looks like it should be Elasaid, like it reads, but is Yallasuth. I don’t know about you, but even when a pronunciation key is provided, I find it difficult to read that sort of name. However, that didn’t stop me falling into this trap too and have a few difficult to pronounce names in The Wolf in Winter, eg, Dearghall (pronounced Jergal). However, they’re minor characters so maybe I get away with it.

4 Watch out for names ending in S

When you use the possessive form you need to add another S or an apostrophe. The book belonging to James is James’s or James’ book. Looks OK but doesn’t sound so good.

5 Think about nicknames, contractions and modes of address

A character can have a long name and that’s fine, but in reality Xenophon Angelicus III would probably be referred to by his friends as Xeno or Angel. Nicknames can be powerful ways to express character. Think about Piggy from Lord of the Flies. Modes of address matter too. An aristocrat might be referred to by title rather than name, or by the name of their earldom or whatever, rather than their personal name. Surnames vs first names is a useful way of showing how characters feel about one another. A friend or lover would be referred to by a first name while you might call an enemy by their surname.

6 Remember that names have associations and meanings

Names come with baggage. Think about the names, Adolf, Napoleon, Lolita. Sometimes you want that baggage; you might hint at someone’s character by calling them Napoleon, although personally I’d avoid that sort of stereotyping. On the other hand, you might call a mild-mannered shopkeeper Ghengis for comic effect or to confound expectations. This area is a bit of a minefield because a name can have baggage or be stereotypical in one culture and not in another.

7 Remember that names have meanings

Don’t do what I did and pick a name at random from a list then discover it’s completely inappropriate. My character, Aelfric, whose name means powerful ruler elf, was originally Aelfrith, which turned out to mean elf of peace. Not a good name for a man who likes a fight! You should also make sure a name you’ve chosen or made up doesn’t mean something rude or funny in another language. Merde looks like a nice name – except we all know what it means in French, don’t we?

You probably won’t be calling your name character Johnny Depp or Melania Trump but you might inadvertently pick a name that your readers associate with someone else. I recently read an excellent thriller but was thrown by the name of the main character which was the same as that of a well-known Irish comedian, so I kept expecting the character to make a joke. He never did. So do a bit of googling before you settle on a name.

Make sure the names you choose for your characters fit in with your setting and culture. For contemporary settings your names should fit the place – the same name can be spelled differently in different areas. In The Wolf in Winter I had two characters with the name Isolde, spelled Essylt and Yseult. The first is the Welsh version of Isolde and the second the Irish version. But I’d used them the wrong way around. Thank goodness for Find and Replace! For historical names you should pick names that would have been in use in the period. And don’t forget that names in the past, and to a lesser extent today, can be associated with certain social classes, which might be relevant in your novel. An ancient Roman name, for example, will tell you a man’s class, family connections, and personal characteristics. I’m still trying to get my head around Roman naming rules.

You can pick fantasy names from a name generator, but is that enough? Whatever the culture you come up with in your fantasy novel there would probably be naming conventions. Are people/creatures named after places or qualities? How many names do they have and how do they use them? Are names inherited? There’s a lot to think about, although you can get inspiration from actual naming strategies in current or historical cultures. (But don’t get carried away and end up down the Tolkeinesque rabbit-hole of inventing your own language!)

1 The phone book is full of weird and wonderful names, and a lot of really ordinary ones. Sometimes you want an ordinary name.

2 Newspapers are a snapshot of current names. You can get copies of newspapers from the past too.

3 Cemeteries and war memorials When I’m stuck for a name I have a wander around my local graveyard.  Bit weird? The header image in this blog post is from my local war memorial.

4 Baby name websites These are popular and really useful.. If you want a name for a particular period you can google popular baby names for certain years. Many sites will also tell you the meaning. Here’s one picked at random: Babynames.com

6 Genealogy sites If you’ve ever investigated your own family tree you’ll have come across lots of fantastic names from the past. Again,  a site picked at random: familysearch.org

7 Reference books For historically accurate names. I found a lot of ancient welsh names in The Mabinogion. Most of my characters’ names come from this source.

8 Books of fiction I don’t mean you should ‘borrow’ the names of characters from other writers. (I accidentally did this for one character, but noticed before it was too late.) I mean take a look at the masters and mistresses of character naming and find out how they came up with the names of their characters.  JK Rowling and Dickens spring to mind.

8 Wikipedia and the internet in general Want to find out about a name? Google it. Wikipedia is also a great source of names. I got some of my character names from Pictish King lists on Wikipedia.

9 Name generator sites and apps There are lots of these. Many provide meanings too and are an excellent way to generate fantasy names (although bear tip 9 in mind) I have a character who has Sarmatian ancestry. A bit niche? No problem. I got a list of Sarmatian names from this name generator site.  Fantasynamegenerators.com

10 Your name notebook You’ve got one, right? A notebook where you record interesting names for future use? To be honest, I don’t have a  name notebook, but I think I ought to start one. If you’re setting out on your writing journey, grab yourself a notebook and a pen, and start making yourself a list of wonderful and inspirational names for your wonderful and inspirational characters. 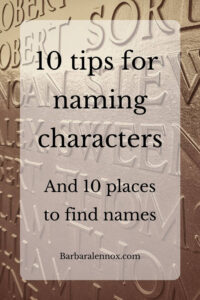