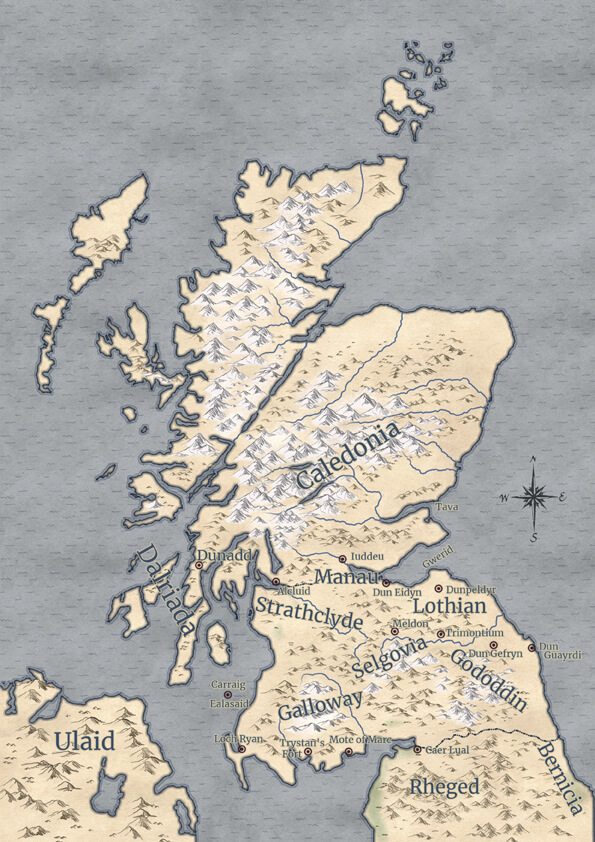 The Wolf in Winter began with an image. A middle-aged man was watching a much younger man walk towards him. The older man was called Governal and he was tutor to the younger man who was called Tristan. But I knew little more about them except for two things. Gorvenal loved the younger man. But he could never tell him. Why? And why not? The young man was impossibly handsome, the older man alone. Was that it? I already knew that Governal would be by Tristan’s side for all of his adventures, but there was something else I remembered from the Arthurian stories I’d devoured as a child. In one version, I forget where, Tristan, mortally wounded, asks Gorvenal to go back home and take up the crown and that gave me a way into answering the questions ‘why?’ and ‘why not?’ Tristan was the son of a king, so perhaps Gorvenal was the son of the same king. Maybe they were half-brothers. Maybe the reason Tristan was the heir rather than his older brother was because Gorvenal was illegitimate. And then something else occurred to me, something that might explain the ‘why not?’ After all, there’s no shame in a man loving his younger half-brother, and no reason why he shouldn’t tell him. The clue came from their ages. Gorvenal is middle-aged, old enough to be Tristan’s father. So maybe he is, or believes himself to be. And that’s why he can’t tell Tristan he loves him, because he can’t tell him why. And so I’d found the strand that runs through what turned out to be The Trystan Trilogy – this truth Goverenal can’t confess to because he’s afraid Tristan will despise him for it. Gorvenal’s betrayal of his own father has a parallel, of course, in Tristan’s eventual betrayal of his uncle Marc, and I knew that this would be important because Gorvenal would try to prevent Tristan from making the same mistake he’d made, without being able to tell him the reason he’s so knowledgeable about the matter.

And so, with this theme in mind, I began to write the story, but it wasn’t long before I got stuck. I was retelling a story set in Cornwall but I didn’t feel comfortable writing about a place I’d not visited. Sure, I had maps and could use them to imagine the landscape, but it’s not the same as seeing it for yourself. So it was time to set aside the writing and do some research.

In truth, you never stop researching, and it can be quite addictive. I learned a huge amount about Dark Age Britain. I unearthed interesting characters, half-mythical, half-historical, from the genealogies of the period. I read everything I could lay my hands on about the ‘truth’ of Arthur. One of these sources was Alistair Moffat’s ‘Arthur and the Lost Kingdoms’, in which he engagingly (since he’s a terrific writer) makes the case for many of the Arthurian stories having originated in lowland Scotland. So why not, I decided, set The Wolf in Winter in Scotland too? And that had the advantage that I could actually go to the places I was describing since they were only a short car journey away. Later I came across Sigmund Eisner’s book ‘The Tristan Legend: a study in sources’, in which the author makes a convincing case for the medieval legend, set in Cornwall and Brittany, having originated in northern Britain and Ireland where a series of unrelated stories had been stitched together. These stories eventually moved south, changing as they did so. And so my decision to set The Wolf in Winter in Scotland and Ireland seemed entirely justified and, to my mind at least, brought the whole thing to life. Gorvenal became Corwynal, a more welsh-sounding name, since the language he spoke would be Brythonic, a forerunner of old welsh. And his mother would be a Pictish war-hostage, making Corwynal half-Pictish or, since I didn’t like the word ‘Pict’, half-Caledonian.

I finished the first draft of The Wolf in Winter quite some time ago and spent a lot of time editing it and submitting it to agents and publishers.  I got the usual pile of rejection slips but also received encouragement from some agents, publishers and editors with the result that I undertook a major rewrite and also carried on to finish the follow up novels.  This took years, but during this time the whole publishing landscape has changed.  Now it’s never been easier to do it yourself and that’s what I intend to do.

Volume I of The Trystan Trilogy, The Wolf in Winter was published on Amazon in November 2021. The sequel, The Swan in Summer will follow in 2022 and the final volume, The Serpent in Spring, in 2023. You can read an extract of The Wolf in Winter on the ‘Look Inside’ feature on Amazon, or on this website here. You can get a sneak preview of The Swan in Summer by subscribing to my Newsletter. You can also learn more about the characters and settings, and find out about the world of The Trystan Trilogy by following my Blog.

Return to The Trystan Trilogy page