An epic retelling of the greatest love story ever told

The Trystan Trilogy is an epic retelling of the legend of Tristan and Isolde, here reclaimed to its true home: Scotland. It is the story of the struggle of Corwynal, tutor, guardian and companion to Trystan, to protect the young man he secretly believes to be his own son, while confronting his own complex destiny. Set in a time of war between four competing cultures, the Britains, Scots, Angles and the mysterious Picts, The Trystan Trilogy is a spellbinding historical adventure, perfect for fans of Bernard Cornwell, Juliet Marillier and Jules Watson. 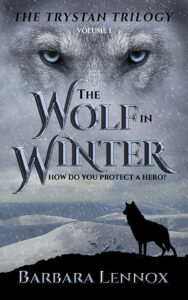 How do you protect a hero?

Corwynal, son of the King of Lothian, dreams of reputation as a warrior. But when his half-brother, Trystan, is born on The Night of Thresholds, he’s forced to rein in his ambitions to become the child’s guardian and mentor.

For seventeen years, he’s kept Trystan safe in Lothian. But now the British Kingdoms have declared war on the powerful Caledonian Confederacy, and there will be no safety for anyone. Especially a young man determined to win fame as a hero.

As war spreads throughout the Lands between the Walls, Corwynal must emerge from the shadows and reclaim his lost dreams if he’s to guard the boy he’s given up his future to defend. But how much more will he be willing to sacrifice for the boy with the secret he can never reveal?

A spell-binding story of second chances, of love and letting go. An epic journey into the heart of a man riven by conflict, set amidst the warring cultures of dark-age Scotland.

First in The Trystan Trilogy, The Wolf in Winter is a thrilling retelling of the classic Arthurian story of Tristan and Isolde.

For more information about The Wolf in Winter (novel extract, book trailers, and the inspiration behind the writing): 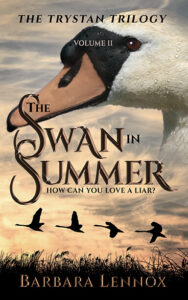 Love will bind them, seas divide them, war unite them, revenge betray them

Trystan, badly hurt in his fight with The Morholt, is dying, but Corwynal, his older half-brother, will stop at nothing to save his life. He’ll risk storm and shipwreck to get Trystan to Dalriada, a Kingdom famous for its healers, but the land of their enemies. Corwynal must keep their identities secret – even from the woman who saves their lives, a woman he comes to love, a woman with secrets of her own.

And when Trystan meets Yseult, a girl sworn to destroy the man who killed her uncle, The Morholt, the tragedy that is the story of Tristan and Isolde begins to take its shape.

Can love survive the secrets they have, the lies they’re forced to tell and the choices they must make? And how can Corwynal protect everyone he cares about when Dalriada becomes embroiled in a new war with an old enemy led by a man from Corwynal’s past?

Second in The Trystan Trilogy, The Swan in Summer is an epic journey into the hearts of lovers divided by conflict, set amidst the warring cultures of dark-age Scotland.

For more information about The Swan in Summer (novel extract, book trailer, and the inspiration behind the writing): 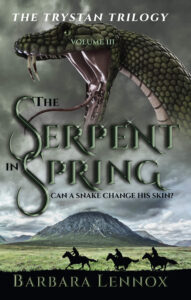 One day you will have to watch the woman you love marry someone else.

Corwynal’s prediction comes true when Trystan is forced to watch the girl he loves, Yseult of Dalriada, marry his uncle, Marc, King of Galloway. Trystan isn’t willing to give her up completely, however, and Corwynal has to stand by, helpless, as the lovers endanger everything he cares about. But when they risk their own lives he has to act. He helps them escape to the one place they’ll be safe, the one place he doesn’t want to go – Atholl in Caledonia.

There he’ll not only have to face the judgement of the Druid Council for a crime he committed as a boy, but the long-planned revenge of Ferdiad, Fili of Dalriada, for a crime he doesn’t remember committing at all.

Corwynal will have to decide where he belongs and what and who he loves the most, unaware that his decisions will lead to the final tragedy that is the love story of Trystan and Yseult.

For more information about The Serpent in Spring (novel extract and the inspiration behind the writing):