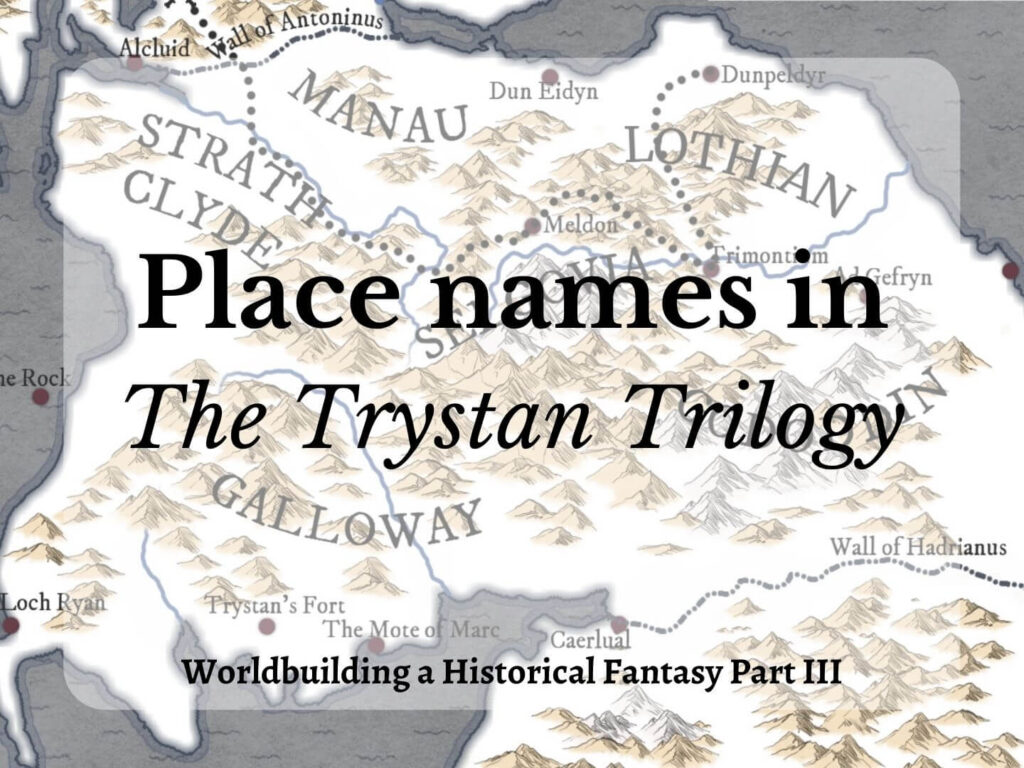 Place names are full of history, so they’re a valuable tool for the historical fiction writer. They can be full of stories too, and understanding what place names mean can give real insights into what somewhere was like in the past: what the terrain was like, who lived there and what was important to them. 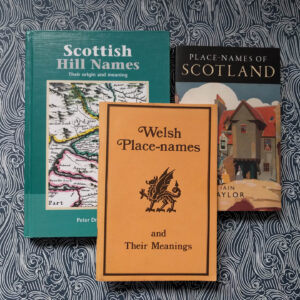 I have to confess to being a bit of a nerd about place names. This fascination began with my many trips to Wales to visit my parents-in-law. The place names in Wales were so different from those I was used to that I wanted to know what they meant. Criccieth, where my parents-in-law lived, comes from Crug (cairn) and Caith (confined). Llanstumdwy, just down the road, means Church on the bend of the river Dwy. Suddenly, the names of places made sense. 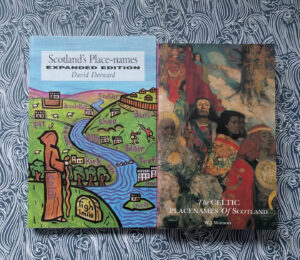 The second source of my place name obsession came from hill-walking in Scotland. Again, I wanted to know what the names of the mountains meant. Stob Garbh (of which there are many), means rough peak, while Creag Meaghaidh means crag of the boggy place, both pretty accurate descriptions of the terrain. There are quite a few intriguing names in the Scottish hills: Drochaid Coire Roill (on the shoulder of Beinn Damh, hill of the stag) means bridge of the dripping saliva. There’s a whole story just in that name!

It was inevitable, therefore, that when I came to choose names for the places in my novels I wanted them to mean something. I also wanted, where I could, to find names that dated from the time of my novels, ie the 5th century.

This led to lots of lovely research, but a lot of frustration because – guess what? – names change with time. In the Lands between the Walls (one of my rare made-up names) the Britons were beset on all sides by other peoples. In the centuries following the events of the novel, these peoples overran the areas in which British was spoken. Different languages took over and, not surprisingly, old places were given new names. Sometimes these were translations of the original names, but often they were new. The original names, in a time of an oral culture, vanished within a generation or two. But little glimmers of the past survive here and there, as if trapped in amber, in the present day names of places – if you know how to read them.

The Wolf in Winter takes place mainly in the Lands between the Walls, the name I gave to the area between the Central Belt and the Borders, the lands of British Kingdoms where people spoke Brythonic, a branch of Old Celtic that would eventually develop into Welsh. Nowadays, the place names have Gaelic or Anglo-Saxon origins, since these are the languages that displaced Brythonic, but there are still a few place names in this area that contain old Brythonic elements. A common element, still found today in Wales, is tref, meaning farm or homestead, and this is found in the name of a hill in East Lothian, Traprain Law, which comes from Tref pren, meaning house/farm of the tree. Traprain Law has another Brythonic name, Dunpeldyr, meaning Fort of the Spear shafts and this is referred to in old land deeds as the old name for Traprain Law. Dunpeldyr might have been the name of the fort, Tref pren the name of a nearby settlement. I decided to call the main stronghold of Lothian (a later name, by the way) Dunpeldyr. Another nearby hillfort is Dun or Din Eidyn. Its meaning is obscure (Eidyn could be a personal name), but this is the old name for Edinburgh. Dun is a common place name element throughout Scotland. It’s an old Celtic name which predates the language division between Goidelic and Brythonic Celtic and so is found in both Gaelic speaking and Old Welsh speaking areas as Dun, Din and Dinas.

The Scots of Ireland and their territories on the West Coast of Scotland would have spoken Goidelic Celtic, which sounds very different from Brythonic Celtic. The equivalent word to tref is baile and there are lots of place names in Scotland today that begin with the place name element Bal. Bal place names are distributed throughout Scotland but are rare in areas where Gaelic was never the main language. A couple of Gaelic place names that appear in The Wolf in Winter are Dunadd – fort on the river Add, and the nearby An Crionan which is the Gaelic name for Crinan. It means the wasted place, possibly referring to the nearby Crinan Moss, a large boggy area. There are more Goidelic names in The Swan in Summer, including Dun Sobhairce, the old name for Dunseverick in Ulster.

The Picts (who I call Caledonians) would probably have spoken a Brythonic language, but all that is left of their language is place name elements. Pet, or pit, meaning a parcel of land, is the most notable one, and place names beginning with pet or pit are only found in what was once the Pictish heartlands, although the second part of a name beginning with Pit usually is of Gaelic origin. Aber, a place name element with Brythonic roots is similarly found mostly in formerly Pictish areas. Original Pictish names were very difficult to find, so I had to resort to names that sounded old and vaguely Welsh. Dunkeld, on the River Tay, comes from Dun Chailleann, a Goidelic name meaning Fort of the Caledonians, so I went with Dun Caled. The name of Atholl derives from Alflotha, meaning new Ireland and was probably a name given to the area by its Gaelic-speaking conquerors. What it was called originally is now lost. Rather than making up a name I decided to stick with Atholl, which itself is an old name for an area now part of the administrative region of Perth and Kinross.

This strategy was the one I used when coming up with place names in my novel. When I could find an old name of the correct linguistic origin, I used it. Otherwise, I went with as old a name as I could find, as long as it looked and sounded vaguely right. Meldon in Selgovia was named after the hill fort Black Meldon. It may come from the Brythonic elements Dun (fort) and Mael (rounded hill). One name I struggled with and haven’t resolved to my satisfaction is an important place in The Swan in Summer. Carradale, on the eastern coast of the penisula of Kintyre has a norse name, as do many places on the west and north coasts and islands of Scotland. These date from the period of the Vikings. Carradale means Kari’s valley, or possibly Copse valley. What might it have been called when it was part of Scots Territory in the 5th century? No-one knows. I wanted it to sound/look similar to the present day name, so I ended up with Carn a’Dhail, meaning Rock or cairn of the haugh/valley. It neither makes sense, nor is grammatically correct, but it looks more or less right.

A few interesting names from The Wolf in Winter

So, to conclude, the place names in The Trystan Trilogy came from a mixture of research and educated invention. I would have liked to be able to find names that dated from the period, but where I couldn’t I was content with an old feel to the names, a sense of a living history. This approach would work just as effectively in coming up with place names in pure fantasy stories. If your world is old it’s likely to have undergone the same processes of change, where meanings are forgotten or found only in old stories, but where they still resonate with the past.

Useful references – the books pictured above:

Other posts in this series: 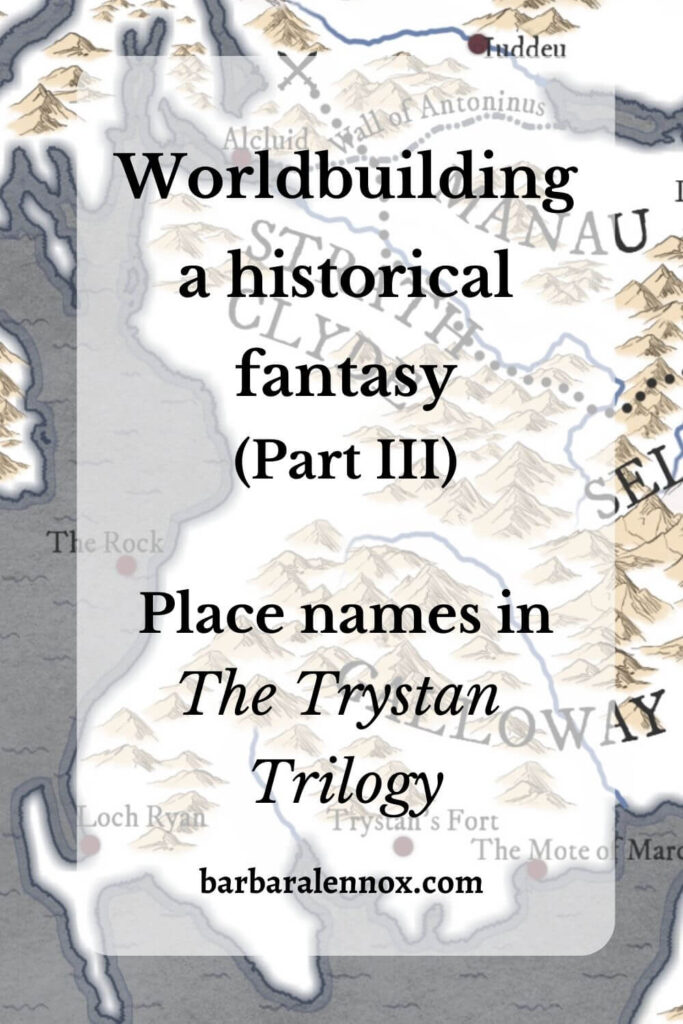