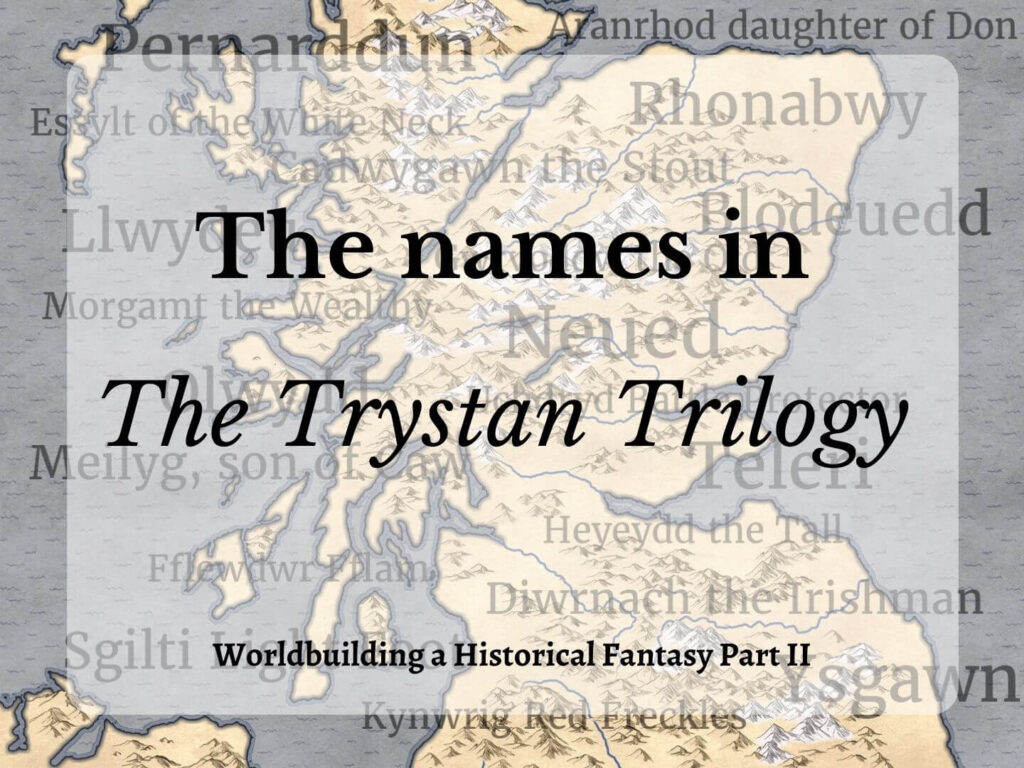 Names are important. Especially for major characters, because you have to live with them for a whole book (or a series of three books). Getting the names right was important to me, so I didn’t just pluck them out of the air. Obviously, since I was retelling a story, I had some names to work with, but were they the right names, given that there were different versions of the same name? How did I go about deciding which one to use? And what about minor characters? Where did they come from? Were any of my characters real people?

To answer some of these questions, it’s necessary to talk about language. And, as in Worldbuilding a Historical Fantasy Part 1, you’re going to have to concentrate:

In the period in which The Trystan Trilogy is set, the end of the fifth century, two Celtic languages would have been spoken in ‘Scotland’: Pritenic or P-Celtic also called Brythonic, and Goidelic or Q-Celtic. Brythonic would have been the language of the Britons (who occupied lowland Scotland), while the Scots (who occupied Ireland and some of the western seaboard of Scotland) would have spoken Goidelic. The language of the Picts (Caledonians), who occupied the highlands, is probably related to Brythonic. Brythonic Celtic gave rise to Welsh, Cumbric, Cornish and Breton, while Goidelic went on to become Irish and Scottish Gaelic and Manx. There may have also have been aboriginal pre-Celtic languages, and it’s been suggested that the Attacotti tribe (possibly of Inner and Outer Hebrides) spoke one of these languages, but the evidence is flimsy, so lets forget about them since they don’t appear in my trilogy (at the moment.)

In The Trystan Trilogy I’ve used personal names found in the oldest of stories in two Celtic language traditions, as well as names from various king-lists and genealogies. The mediaeval Tristan and Isolde legend itself contains many of the character names I’ve used, but since these are likely to have been modified in the course of the transmission of the stories to the continent, I’ve changed some of them ‘back’ to give them more of a ‘Welsh’ look. Thus Tristan has become Trystan, Gorvenal has become Corwynal, and Arthur has become Arthyr. Other names, such as Bedwyr and Gwenhwyvar, derive from the original Arthurian stories found in the Mabinogion. Some of the names of minor characters, for example Dumnagual and Ciniod, come from genealogies and king-lists from the period. Similarly, I’ve used old Irish annals as the source for the names of the Scots characters, such as Feargus, Loarn and Oengus. Yseult is the Gaelic version of the name Isolde, so I used it for the Scots character who first makes her appearance in The Swan in Summer, the second volume of The Trystan Trilogy, and I gave the British character the Welsh version of the name, Essylt. They sound the same but, conveniently, look different on the page. Another major character who will appear in The Swan in Summer, is Brangianne, a name which would be Branwen in British, meaning White Raven, a reference to which sharp-eyed readers will notice in the epilogue of The Wolf in Winter.

So here’s a run-down of where I got my names:

Names from the Tristan and Isolde legend

There are many versions of this tale and names vary, but I used these as the basis for my character names.

Corwynal comes from Gorvenal (Gouvernail). For some reason, I don’t like names beginning with G, so I changed it, and also gave it more of a ‘welsh’ look. It still doesn’t look very welsh to me, and is actually quite difficult to say, so I’ve toyed with the idea of changing it to Corwyn. But I think it’s too late for that.

Rifallyn is from Rivalin, Tristan’s father in one of the versions of the legend.

Gwenllian, Tristan’s mother, was Blanchefleur in the original legend, meaning white flower. The actual welsh equivalent is Blodyngwyn, but that’s a bit of a mouthful, so I changed it to Gwenllian which means fair/flaxen, and I gave her the epithet ‘Fair Flower of Galloway’.

Essylt is the welsh version of Isolde. In the original legend she’s Isolde of the White Hands, to distinguish her from the other Isolde, so I kept this description.

Kaerherdin, in the legends, is the brother of Essylt of the White Hands, and I kept this relationship and his name.

Marc also appears in the legend, but a March, son of Meirchion, can be found in the Welsh Triads as one of the great seafarers. Alternately, Marc might derive from the name Meirchion. A Merichion, son of Gwrast, a King of Rheged, appears in the pedigrees and I went with this latter interpretation since he was supposed to be born in 445 which fits in with Marc’s age in my story.

Hoel also appears in the legend as King of Brittany. I relocated him to Scotland.

The Morholt or Marhaut appears in all versions of the legend, but it’s never clear whether this is a title or a name or what it might mean, so I’ve left it vague.

I took names from the earliest texts. These include Arthyr (Arthur), Bedwyr and Gwenhwyvar. Lancelot is a later mediaeval addition to the legend and takes the role of Bedwyr in the early texts, so I didn’t include him.

Blaize is also from Arthurian legend, and was the tutor of Merlin. I originally had a Merlyn in my story and had the idea that Blaize might have taught him. I got rid of Merlyn but kept Blaize.

Lot appears in Arthurian legends as husband to Arthur’s sister, and is often referred to as Lot of Lothian. I’d already decided that Trystan would come from Lothian so in my version Lot is Overlord of Lothian, but King of Gododdin, a genuine kingdom of roughly the correct period.

Lot’s sons Gaheris, Gawain, Garyth and Agrafayn have been taken straight from Arthurian legend. His fifth ‘son’ Mordred/Medraut (possibly Arthyr’s son) originally played a major part in The Trystan Trilogy but I got rid of him as a character along with Merlyn, and deleted references to his existence in the final draft. He really was a complication too far.

Caw and his son Heuil appear in some early Arthurian texts. There is reference to Caw being from Manau.

Talorc – this is Corwynal’s ‘pictish’ name, and this comes from Arthurian legend also, where he appears as the father of Drust, the pictish version of Tristan. The names Talorc and Drust also appear in pictish king-lists (see below).

Aelfric, Ealhith, Wulfric and Sigeweard are all Angle names, taken from an online list of Angle names.

There are various kinglists for the period, although it’s difficult to be certain how accurate they are or when the various kings lived. Dumnagual, King of Strathclyde, is likely to have been real and lived at roughly the right time. Marc or March, son of Merchion, or Gwrast, depending on which list you read, may have been real.

Feargus, Oengus and Loarn are the probably mythical kings associated with the founding of Dalriada, probably later than the end of the 5th century, but I liked the names. Ferdiad is the name of Cuchulain’s friend in Irish mythology. Conaire also appears in Irish mythology. Ninian was a British saint from a later period but in my Trilogy I made him a Scot, although this isn’t a Scots Gaelic name.

Ciniod appears in a Pictish king list, as does Talorc and Drust. Very few pictish names survive, but they include Domech. Broichan was a pictish druid referred to in tales of St Columba.

Names from The Mabinogion

The Maginogion is a collection of ancient welsh texts and contain many wonderful welsh (ie British) names. (See the background to the header image.) I tried to restrict myself to names that were pronounceable. Names sourced from The Maginogion include many minor characters, such as Madog, Elphin, Tegid, Clust, Rhun, Daere, Llwyd and Arawn.

Other sources for names

Celtic First names – a useful little book which seems to be out of print. Various obscure corners of the internet, including name generator sites. And my imagination.

So, coming up with all the names for The Wolf in Winter and the following novels was a by-product of all the research I did, and I loved coming across old names and finding out their meanings and history. I hope that by going back to the original sources the names of my characters give the books more of an authentic feel than if I’d just picked the names out of the air. Plus it was so much fun!

The next article in the World-building a Historical Fantasy series will also be about names – but about places. So look out for that one. 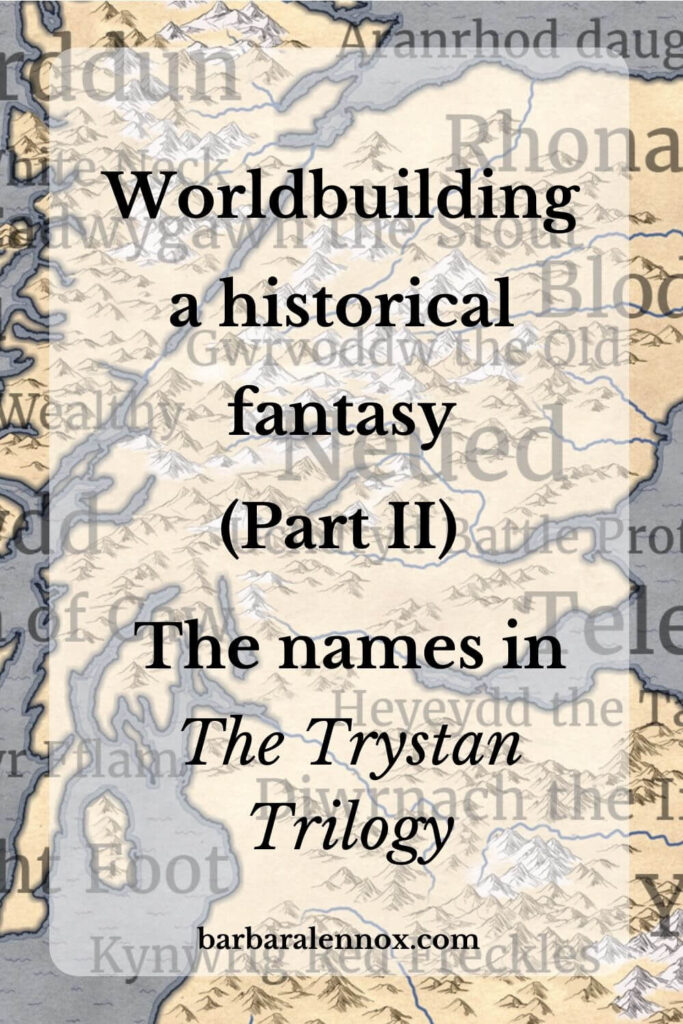