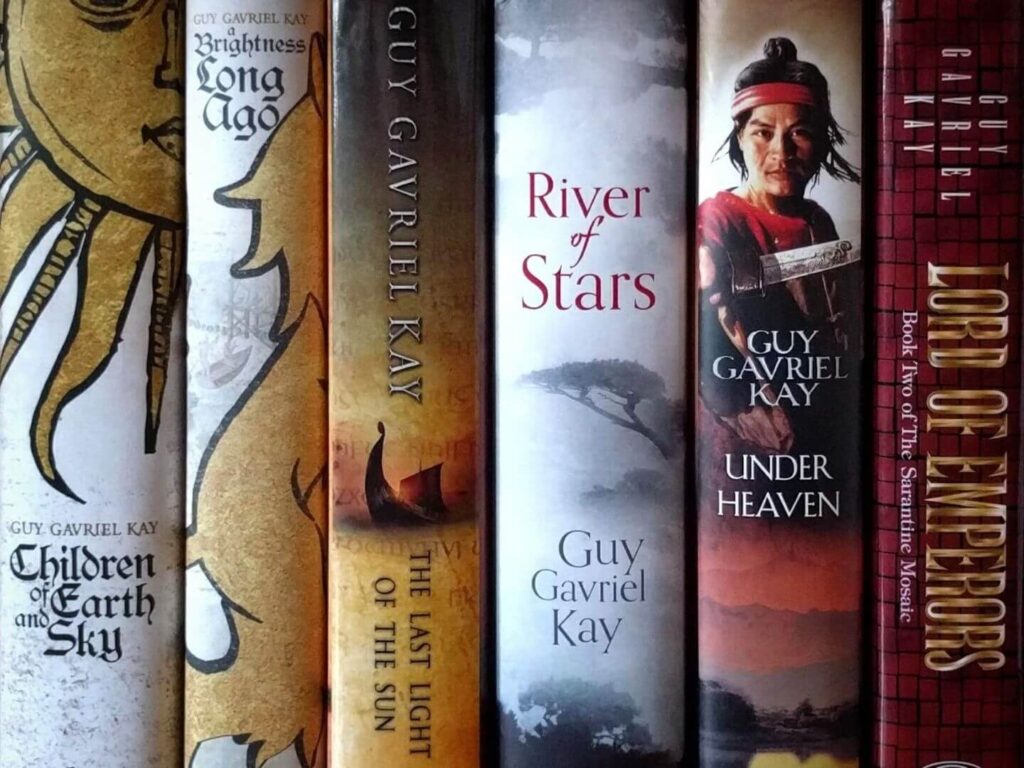 Guy Gavriel Kay is a Canadian writer who helped Christopher Tolkien edit The Silmarillion, so he’s steeped in Tolkienesque lore, and it shows in his writing, which is magisterial! Reading one of his novels is like taking a masterclass in writing fantasy fiction.

His fantasies take place in fictional settings but are largely based on real places and historical periods, although these vary widely. Most of his novels are set in a version of Europe, eg Constantinople in the reign of Justinian I, or Spain in the time of El Cid, but two take place in 8th and 12th century China. The use of real places and times gives a fantastic depth to his world-building, and he takes the familiar and adds unfamiliar, often magical, elements that somehow feel absolutely right.

Here’s a run-down of his novels, what they’re about, why I liked them, why you should read them, and a few quotes at the end to show what a brilliant writer he is.

The Fionavar Tapestry – a series of three books, The Summer Tree, The Wandering Fire and The Darkest Road. This is a portal fantasy where a group of Canadian students find themselves in Fionavar, the ‘First of Worlds.’ I’m not a great fan of portal fantasy myself, but these books suck you in. The characters are incredibly well-drawn and all are deeply complex and conflicted. The books draw heavily on Arthurian themes and several Arthurian characters turn up in the second and third books. There’s also a Silmarillion feel to these books too, with a Dark Lord, resembling Morgoth, and a profound sense of a doom and of ‘fighting the long defeat’. Slightly over the top in places, slightly too many themes going on, but these are minor quibbles. Once I’d read – and wept over – these books, I was ready for the next of his books.

Tigana takes place in a setting based on renaissance Italy, although geographically it’s set in a world that looks like the Peloponnese in Greece. A disenfranchised Prince and his companions struggle to overthrow two powerful sorcerers. What is particularly appealing about this is the portrayal of one of the sorcerers – powerful and yet with a vulnerability which will be tragically exploited. You can’t help but root for this ‘villain’.

A Song for Arbonne was inspired by the Albigensian Crusade in mediaeval Provence. A story of Troubadours, forbidden love, the power of women, and politics, lots of politics. No magic in this book, but it has sufficient complexity that it doesn’t need it. This is my joint second-favourite of all his books.

The Lions of Al-Rassan is set in medieval Spain. Religion plays a major role in this book and although the religions are made-up, they are clearly based on the religions of Christians, Muslims and Jews. This is another book in which the plot is driven by politics and the juggling for control of territory. The two main male characters, Rodrigo Belamonte and Ammar ibn Khairan, are complex and charismatic, and it’s no surprise when the main female character, Jehanne, is drawn, tragically, to both. The final scene is a masterpiece of writing – a fight scene between the two main characters with frequent switches of point of view so you’re never quite sure what’s happening in all the twists and turns of the action. And it’s deeply tragic because you want both to win but know that can’t happen. My joint second favourite book.

The Sarantine Mosaic is two books, Sailing to Sarantium and Lord of Emperors, and is inspired by the Byzantium of Justinian I in the 6th century. The main character is a mosaicist, who travels from Rhodias (equivalent to Rome) to Sarantium (equivalent to Byzantium) and who meets talking mechanical birds and ancient gods on the way, then finds himself embroiled in power struggles in a fabulous culture of courtesans and chariot racing. A little bit of magic is involved, but again religion plays a powerful role, and we can see the beginnings of the organised religions of The Lions of Al-Rassan. My third favourite story.

The Last Light of the Sun is my favourite  of all his books and I would say that it ranks up there with Lord of the Rings. It’s set in the United Kingdom (but annoyingly, unlike all his other books, there is no map!) and the historical influence is the 9th century Viking invasions during the reign of Alfred the Great. The cultures explored are those of the Erlings (Vikings), Anglcyn (Anglo-saxons) and the Cyngael (the warring princedoms of the Welsh). There’s a bit more magic in this book and, for those who love fairies, there are fairies, but dark and dangerous ones.

Ysabel is the only book I no longer have because I really didn’t enjoy it enough to read it again. It’s a contemporary fantasy, set in Provence, centring on a teenage boy. I didn’t like the main character and the plot lacked cohesion and believability. There are a couple of characters from the Fionovar Tapestry, and reference to Celtic legends. A disappointing mish-mash, but I may be alone in my opinion since it won World Fantasy Award for Best Novel in 2008.

Under Heaven was inspired by 8th century Tang Dynasty, about which I know nothing, so I liked this less than his other books, although, like his other books, the characters are complex and engaging, the cultures he creates strange but utterly believable, and the plot gripping.

River of Stars has the same setting as Under Heaven, but was inspired by the 12th century Song dynasty. It’s one of those books where you suspect how it’s going to end but you don’t want it to end that way and hope, against hope, that things will work out.

In Children of Earth and Sky, Kay has gone back to Europe, and this book takes place in a world based on Italy, Istanbul and the Balkans during the 15th century, the world of The Sarantine Mosaic but much later. A story of merchants, pirates, spies and painters travelling to the fabled gold-walled city in the East. It draws on the same religions and political groupings Kay has imagined in earlier books, so it feels very familiar.

A Brightness Long Ago is a prequel to Children of Earth and Sky, and explores the politics of a city very like renaissance Venice in a time of powerful city states.

All the Seas of the World, based on the same world as the last two books, is due to be published in Spring 2022. I’ll be pre-ordering it as soon as it’s available.

So, are Guy Gavriel Kay’s novel really fantasy? Or are they historical fiction? Or both? He doesn’t like the description of historical fantasy being applied to his books, and I agree with him. Some books are beyond pigeon-holing and his are among them. The worlds Kay writes about are as richly envisioned as Tolkien’s, although they contain no non-human characters. But the characters he writes about are complex and nuanced and very human in the way they deal with the rules of the worlds in which they live, whether these rules are magical, political or cultural. At their heart, Kay’s books are character-driven stories about people who love, hate, sacrifice, take revenge, laugh and cry. If you like that sort of book, you’ll love these. If they have a flaw it’s (in my opinion) that he has too many point of view characters, some of whom appear only once. But that’s a minor and forgivable flaw because, above all, he’s an excellent writer (and poet, as it happens), as I believe the following quotes make clear:

She leaped. Felt the night wind in her face and in her hair, saw the dark ground of the garden begin to hurtle up towards her, heard voices for an instant, and then none at all, only the loud, rushing wind. She was alone, falling. She had always been alone it seemed. Endings. A candle. Memories. A dream, a prayer of flames, that they might come. Then a last doorway, an unexpectedly gentle darkness that seemed to open wide before her in the air. She closed her eyes just before she went through. (From Tigana)

He was king of a precarious, dispersed, unlettered people in a winter-shaped, beleaguered land, and he wanted to be more. He wanted them to be more, his Anglcyn of this island. And given three generations of peace, he thought it possible …. He didn’t think three generations would be allowed them. Not in these northern lands, this boneyard of war. (From The Last Light of the Sun) 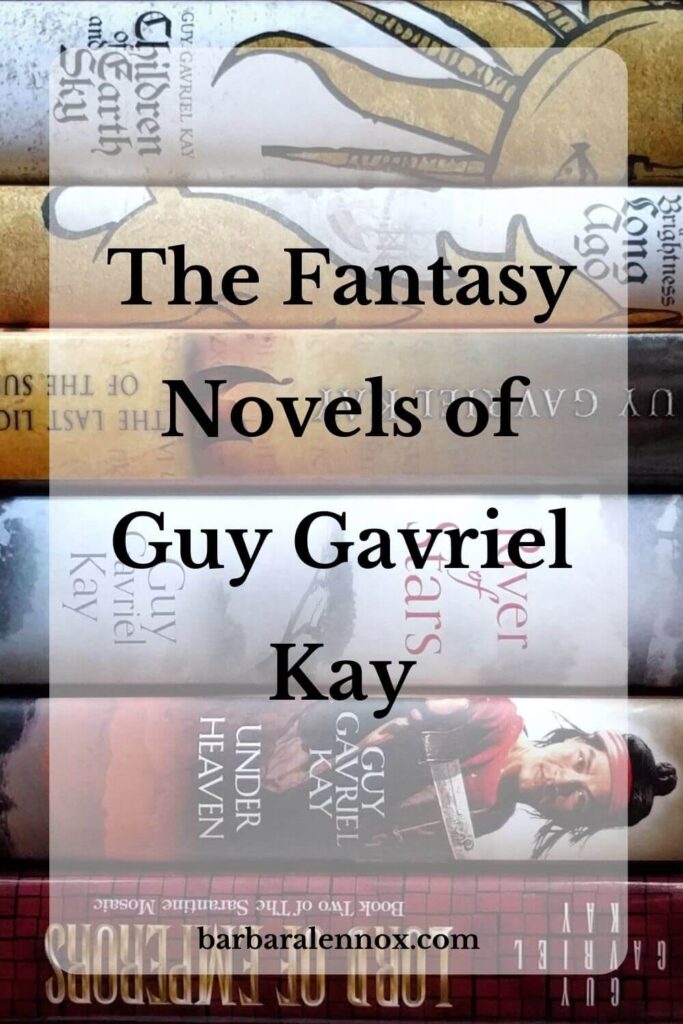 3 thoughts on “The Fantasy Novels of Guy Gavriel Kay”