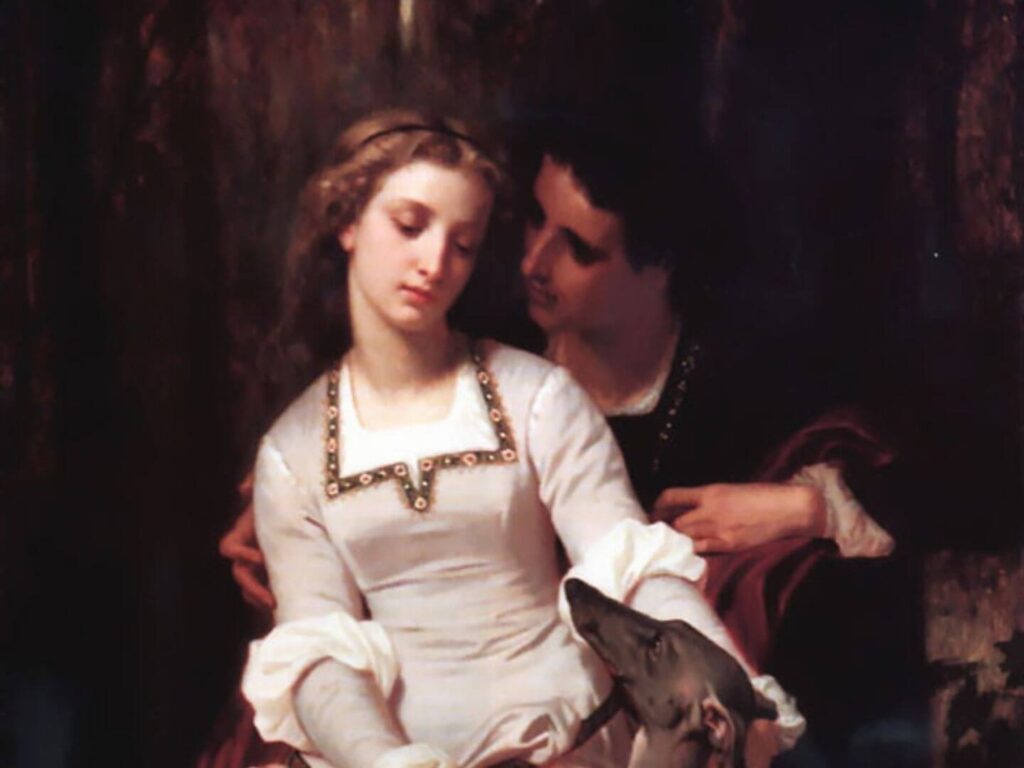 The legend of Tristan and Isolde is a great story – a classic love triangle of Tristan/Isolde/King Mark with lots of adventures, and is part of the Arthurian body of tales. So why isn’t it retold as often as is the Arthur/Lancelot/Guinevere story? I have a number of theories which I won’t bore you with here, but the fact remains that it really isn’t retold that often, which is why I’m redressing the balance with my own retelling.

But enough of me and my story (until the end). This blog post is about the classic retellings, and they go right back to the beginning of the 20th century.

The Romance of Tristan and Iseult by J Bedier. 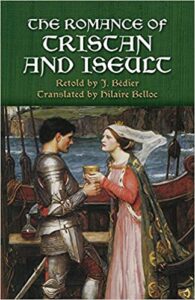 The Frenchman, J Bedier, collected and wove together a number of mediaeval versions of the legend in the early part of the 20th century and his work was translated into English by Hilaire Belloc. This short book is the one to read for a summary of the legend which goes as follows:

The heroic Tristan, nephew and champion of King Marc of Cornwall, journeys to Ireland to bring home his uncle’s betrothed, the fair Iseult. Their shipboard voyage takes a tumultuous turn with a misunderstanding and a magic potion, and the lovers quickly find there’s no turning back.

Tristan and Iseult by Rosemary Sutcliff 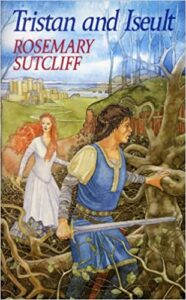 This retelling for children, was published in 1971. Rosemary Sutcliff is a marvellous writer and this story has a wonderful rhythm to the writing that makes it feel very ancient. Here’s a description of the book:

On a quest to find a wife for the King of Cornwall, Tristan is blown off course and fetches up in Ireland. Concealing his identity, he slays the terrible fire-drake which has laid the land waste and in return wins the hand of Princess Iseult as a wife for his king – only to fall in love with the princess himself.

Drustan the Wanderer by Anna Taylor 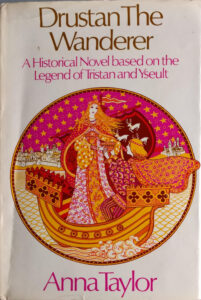 This was also written in 1971.This retelling goes back to the original sources, together with archaeological evidence, and ancient Welsh Arthurian sources, to turn the story into more of a history than a myth. It’s set in the classical Cornish setting although she uses the Pictish (ie, Scottish) name for Tristan, and an old Celtic version of Iseult, Essylt. A very interesting retelling, although I didn’t particularly enjoy the first person narration from the point of view of Drustan. Frustratingly, Anna Taylor mentions in her introduction that this quite short book was edited down from 120,000 words. I’d love to have read the original draft! Here’s a summary of the plot:

Drustan, contemporary of King Arthur, is a fearless fighter. Befriended by Myrddin the bard, he is taught magic and poetry by the druids. But he is fated to fall in love with his uncle’s bride, Princess Essylt of Erin. Forced to renounce Essylt to King Marc, Drustan wanders the world in search of peace, heedless of those to whom he brings suffering, all but destroying himself and Essylt by the force of his passion. 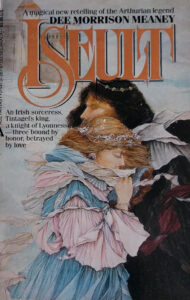 This was written in 1985 and pretty well follows the classic story with a lot of magical elements. I found it somewhat colourless and remote. This is a description of the story:

In all the lands of Arthur’s Britain no knight could outshine Tristan of Lyonnesse. Fierce in battle, gentle on the strings of a harp, unequalled in the hunt, notorious in Tintagel’s bedrooms, he seemed bound for a glorious destiny – and found it in the court of his uncle, King Marc, who named him heir to the throne of Cornwall. For Mark, Tristan risked his life in bloody combat with the dread Morholt. For Mark, Tristan journeyed to the sorcery-ridden land of Ireland to kill a dragon and win Mark a bride. Tristan loved his king. But he loved his king’s wife more … 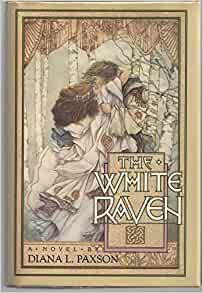 Diana Paxson was primarily a fantasy writer. This retelling is a heady mixture of fantasy and the stark realities of the iron-age cultures of the times and is interesting in that the principal narrator is Branwen, a woman who appears in the original stories as Brangianne, companion/servant to Isolde. Here’s the story:

When the British King Marc’h offers the Irish King the peace he has longed for in exchange for the hand of Princess Esseilte, Esseilte is devastated. She is to be used as a pawn in a political game – and, worse still, her life is now to be inextricably bound with that of the man she must both love and hate. It is to Branwen she turns for help and solace: Branwen, the White Raven, healer and destroyer, Queen of the Otherworld yet servant to Esseilte, Branwen who loves King Marc’h as hopelessly as Esseilte loves Drustan.

Isolde, Queen of the Western Isle,  by Rosalind Miles 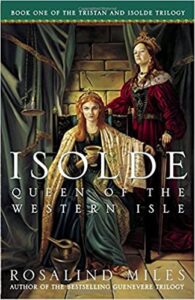 This book, written in 2002, is the first of a trilogy, the following books being The Maiden of the White Hands and The Lady of the Sea. I found the main character a bit irritating, the tropes predictable and the setting too mediaeval for my taste. I haven’t bought the third book. This is the description of the first book:

Only daughter of Ireland’s ruling queen, Isolde has spent her girlhood on Avalon. Her life has been spent perfecting the skills that have made her the most noted healer of the isles, and preparing herself for the time when she must become Queen and Guardian of the Great Goddess herself. And when the king’s nephew, Sir Tristan of Lyonesse, is wounded so badly in battle that only Isolde can save him, the stage is set for the mythic tale of star-crossed lovers that the world knows so well.

Prince of Dreams: A tale of Tristan and Essylte, written by Nancy McKenzie in 2003. I haven’t got this book – some of the reviews (and the cover art) put me off – but I’ve now ordered it to add to my collection.

Castle Dor by Arthur Quiller Couch, a version with a modern setting, unfinished but completed on his death by Daphne du Maurier. 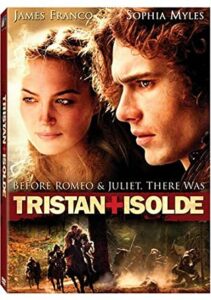 One of my all-time favourite retellings is Bernard Cornwell’s 1966 handling of the story as a side-story in Enemy of God, part of his Arthurian Warlord Chronicles. Subtle and doom-laden, but realistic.

Tristan and Isolde, directed by Kevin Reynolds. This film is marvellous. Beautifully and atmospherically filmed with the main characters, Tristan, Isolde and Mark played by James Franco, Sophia Myles and Rufus Sewell. Excellent casting! There are other film versions, mostly foreign language films, but I’ve not seen them.

Tristan und Isolde by Richard Wagner. To my shame, I’ve not seen or listened to the whole opera, although I know and love the main arias.

I’m sure there are more retellings out there, but these are the best known ones. One day this small collection of retellings will be joined by my own version. So, what is my take on the story?

The Trystan Trilogy by Barbara Lennox

I hope to publish this later in 2021. The trilogy is made up of The Wolf in Winter, The Swan in Summer and The Serpent in Spring. The first is narrated by Corwynal, who is companion/tutor to Tristan (and is the Governal of the original legend). The second is narrated jointly by Corwynal and Brangianne, companion to Yseult, and in the third they’re joined by Ferdiad, companion to the Morholt, the champion Tristan defeats in the first book. Like many others before it, it goes back to the original Celtic sources. Textual research suggests that many of these probably originate in the north and in Ireland, and so, unusually, I decided to set it in what is now Scotland, but which at the time was a warring amalgam of the cultures of Britons, Angles, Picts and Scots. So there are lots of battles and political manoeuvrings! Here’s a brief description of the first book:

Corwynal is the half-Caledonian son of the King of Lothian, guardian and tutor to his much younger half-brother, Trystan, who he secretly believes to be his own son. For years he’s kept him in Lothian to avert a dream he has of a challenge and a death. But when war comes to Lothian, Corwynal struggles to protect a boy desperate to win a name for himself as a warrior. Corwynal’s task becomes more difficult as Trystan begins to forge his own way in the world, an independence that ultimately results in Trystan accepting a challenge from The Morholt, a famous Scots champion, the meeting Corwynal has long had nightmares about. Can he stop what the Gods and fate have decreed? And how much is he prepared to sacrifice for the boy he believes to be his own son?

I hope you’re now inspired to read some of these amazing retellings (and my own book when it comes out, of course!)

Read more about The Trystan Trilogy.

Wikipedia article about the legend, the sources, and  with a list of retellings.